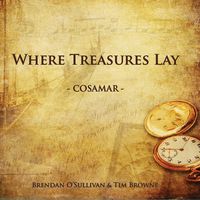 From the recording Where Treasures Lay

The album features some fresh new arrangements of some folk classics such as “Step it Out Mary’, Botany Bay and Mrs. McGrath as well as some less well known songs such as “Maureen Gael Duadh”. It also features the poem “The Ghost of Roger Casement’ by William Butler Yeats that Tim has put to music and given a Cosamar arrangement. The album also includes a tribute to Finbar and John Dwyer with a lovely rendition of three of their reels with the help of guests John Byrne and Eamon Casey on Flute and Accordeon.